Interview with Todd Bemis of Atwater on Gore Creek 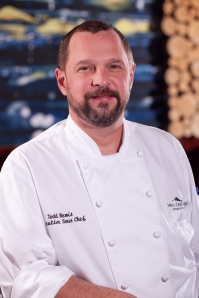 Brief Bio: Born in Edmond, Oklahoma and having spent his childhood in North Texas, Todd grew a passion for cooking at an early age. His first experience with food was working in an ice cream store cooking hamburgers and hotdogs at the age of 16. Todd’s formal culinary training was with American Culinary Federation Apprenticeship at the Anatole Hotel near Downtown Dallas. Todd’s apprenticeship involved formal training within the 12 different outlets at the Anatole, including time spent in the pastry kitchen and with the garde-manger. At the end of his apprenticeship, Todd cooked for several different chefs as business required. He started working at the Bristol Hotel Company’s flagship hotel in 1987 as a Sous Chef. During his 16 year tenure at Bristol Hotels, Todd held the following positions: Sous Chef, Executive Chef, Food and Beverage Director, Director of Convention Services, Rooms Director, and General Manager. As GM, Todd was responsible for renovating and repositioning five properties, all with heavy food and beverage operations in Jackson MS, Atlanta GA and Omaha NE. Todd completed the American Hotel Motel Association’s Certified Hotel Administration program in 1996. He was awarded as “Hometown Hero” by the Jackson MS Chamber of Commerce and inducted into the Chamber’s Leadership Jackson program. Todd moved back to Texas in 2000 and started working as District Manager and Corporate Executive Chef for Alonti Café and Catering managing eight stores. In 2005, Todd moved to Hot Springs, Virginia to join The Homestead culinary team where he worked as the Banquet Chef and Executive Sous Chef. In 2011, Todd moved to Vail, Colorado to head up the culinary team as the Executive Chef at Vail Cascade Resort & Spa, a Destination Hotels & Resorts’ property. 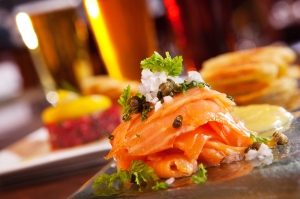 Why is the pairing of food & beer important to you?: Beer is available and more appealing to a greater number of our guests. Our average diner would not ever consider purchasing one of the world’s best wines, but definitely would consider purchasing one of the world’s best beers. I can visualize a Rolls Royce or Ferrari owner drinking a great beer at the same bar or in the same restaurant as the person who repairs or maintains that vehicle. The specifics of pairing go much further though. Beer brewers provide a greater variety and latitude than wines in general making the pairing of food and beer more dynamic and interesting.

What got you started on pairing food & beer? When I became involved in the Big Beers, Belgians & Barleywines Festival, an annual event hosted at Vail Cascade Resort.

Who are the chefs you admire?: The regular everyday chef. The guys on TV are great, but the ones I admire are the culinarians that are in the trenches and operating successful establishments on a day to day basis. 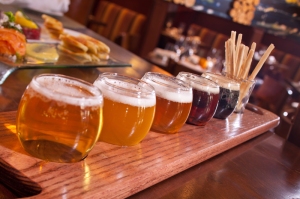 What are some of your favorite pairings?: Three Philosophers and our Chocolate Mousse Cake Dessert. Brek Brewery’s Summer Cab Ride with PEI Mussels

Favorite style / beer to pair with?: Ambers and IPA’s

Favorite all time beer?: Too many to decide.

Thoughts on the future of food & beer in fine dining?: I believe that we are on the edge of a real explosion. The micro / craft brewing industry is coming to the forefront of the restaurant industry. There have always been specialty restaurants that maintain a significant stock of varieties from around the world but now, main stream restaurants are starting to carry more varieties. I believe that it is going to become commonplace for good restaurants to carry a variety of craft beers.
As Vail’s first restaurant to explore the fine art of uniting craft beer with creative cuisine, Atwater on Gore Creek extends the brewing tradition to an interactive menu of savory food, dessert and beer pairings. Small plate offerings and entrées are revamped seasonally, showcasing artisan ingredients, impromptu duos and the diversity of flavors craft brewers bring to the table. 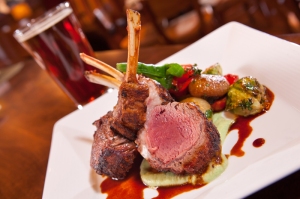 Favorite restaurant in a city not your own?: The original Sunny Bryans Barbecue in Dallas TX

It’s great to see a resort that “get’s it”, why have a world class wine and scotch menu to pair with your meals and drop the ball when it comes to beer? We highly recommend eating at this dining destination or stop out for the Big Beers, Belgians & Barleywine festival. Look into getting tickets to next years festival which starts on Jan 10, 2013. Click here for more information.

This entry was posted in Uncategorized. Bookmark the permalink.